In the past month I have been working on my GSoC project in Debian’s Distro Tracker. This project aims at designing and implementing new features in Distro Tracker to better support Debian teams to track the health of their packages and to prioritize their work efforts. In this post, I will describe the current status of my contributions, highlight the main challenges, and point the next steps.

I communicate with Lucas Kanashiro (my mentor) constantly via IRC and personally at least once a week as we live in the same city. We have a weekly meeting with Raphael Hertzog at #debian-qa IRC channel to report advances, collect feedback, solve technical doubts, and planning the next steps.

I created a new repository in Salsa to save the log of our IRC meetings and to track my tasks through the repository’s issue tracker.Besides that, once a month I’ll post a new status update in my blog, such as this one, with more details regarding my contributions.

When GSoC officially started, Distro Tracker already had some team-related features. Briefly, a team is an entity composed by one or more users that are interested in the same set of packages. Teams are created manually by users and anyone may join public teams. The team page aggregates some basic information about the team and the list of packages of interest.

Distro Tracker offers a page to enable users to browser public teams which shows a paginated, sorted list of names. It used to be hard to find a team based on this list since Distro Tracker has more 110 teams distributed over 6 pages. In this sense, I created a new search field with auto-complete on the top of teams page to enable users to find a team’s page faster, as show in the following figure:

Also, I have been working on improving the current teams infrastructure to enable Debian’s teams to better track the health of their packages. Initially, we decided to use the current data available in Distro Tracker to create the first version of a new team’s page based on PET.

Presenting team’s packages data in a table on the team’s page would be a relatively trivial task. However, Distro Tracker architecture aims to provide a generic core which can be extended through specific distro applications, such as Kali Linux. The core source code provides generic infrastructure to import data related to deb packages and also to present them in HTML pages. Therefore, we had to consider this Distro Tracker requirement to properly provide a extensible infrastructure to show packages data through tables in so that it would be easy to add new table fields and to change the default behavior of existing columns provided by the core source code.

So, based on the previously existing panels feature and on Hertzog’s suggestions, I designed and developed a framework to create customizable package tables for teams. This framework is composed of two main classes:

We have been discussing my implementation in an open Merge Request, although we are very close to the version that should be incorporated. The following figures show the comparison between the earlier PET’s table and our current implementation.

Currently, the team’s page only have one table, which displays all packages related to that team. We are already presenting a very similar set of data to PET’s table. More specifically, the following columns are shown:

As the table’s cells are small to present detailed information, we have added Popper.js, a javascript library to display popovers. In this sense, some columns show a popover with more details regarding its content which is displayed on mouse hover. The following figure shows the popover to the Package column: 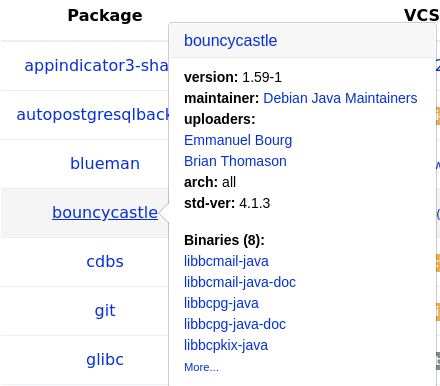 In additional to designing the table framework, the main challenge were to avoid the N+1 problem which introduces performance issues since for a set of N packages displayed in a table, each field element must perform 1 or more lookup for additional data for a given package. To solve this problem, each subclass of BaseTableField must define a set of Django’s Prefetch objects to enable BasePackageTable objects to load all required data in batch in advance through prefetch_related, as listed bellow.

Finally, it is worth noticing that we also improved the team’s management page by moving all team management features to a single page and improving its visual structure:

Now, we are moving towards adding other tables with different scopes, such as the tables presented by PET:

To this end, we will introduce the Tag model class to categorize the packages based on their characteristics. Thus, we will create an additional task responsible for tagging packages based on their available data. The relationship between packages and tags should be ManyToMany. In the end, we want to perform a simple query to define the scope of a new table, such as the following example to query all packages with Release Critical (RC) bugs:

We probably will need to work on Debian’s VCSWatch to enable it to receive update through Salsa’s webhook, especially for real-time monitoring of repositories.

Plans for DebCamp and DebConf 18